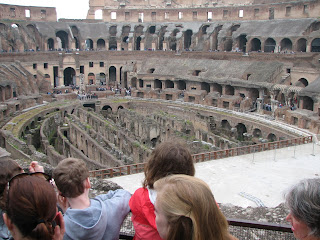 Traveling always brings adventure, and to be sure adventure always involves obstacles to be overcome. I kept that in mind as I gathered all the clothing and comforts of home that a medium-sized suitcase and carry-on bag could accommodate. I could hardly believe it. I was heading to Italy. And not some tiny Alabama town that had borrowed a European name as post offices appeared on the frontier like Troy or Rome, London or Andalusia. No this road less traveled would take me across an ocean and two countries.

Hours after a long cramped overnight flight where sleep was a hollow cruel fantasy, we landed in a different world. There is a feeling that takes over in places where history can be traced not hundreds but thousands of years. In Alabama, I am one of those peculiar folk who can get all tingly walking over the ground described in history books. Setting foot in Rome was almost sensory overload. Flowers bloomed everywhere. Trees lined the cobblestone streets. Public fountains for drinking flowed from ornately carved stone works as they have for centuries. I was giddy.

I am always taking in the big picture, and then focusing on the smaller details. So it was in Rome. I adored the sights and views of those seven hills and the umbrella pines. Streets paved with stones and travertine covered buildings everywhere were beautiful. But then there were the cigarettes. Coming from a country where the dangers of smoking come in advertising in every medium as well as school curriculum, it was odd to see a large number of people smoking in public places everywhere. As we walked, the most common items seen in the crevices among the cobblestones were cigarette butts. Millions of them. The next most common item: wine corks. A distant third would have to be the more recent addition of earbuds from thousands upon thousands of iPods and radios used by the millions of tourists there.

One of the first places we visited was the Coliseum. It was a massive venue created from the most exquisite materials nearly 20,000 years ago. I tried to drink in the vistas, absorb all the grandeur that it had been in those days when 50,000 or more spectators crammed inside to see the events on display. As we walked through the place, I couldn't help comparing it to the large stadiums of today where football or concerts take place. Closing my eyes, I could almost hear the roar of a crowd anticipating a great competition. Today's spectators, though, wouldn't be walking on white marble or enjoying ornate frescoes and carvings on every surface. It made me wonder what will remain of our culture a thousand years hence. Will there be anything left to inspire awe and wonder among people who walk through the ruins of our civilization?

Then there is the contradiction of the ancient place. The structure itself demonstrates the best in human engineering and artistry, the heights people can achieve given the opportunity. Underground passages, ingenious machinations and the capability to flood the arena to hold water sports and competitions. Designers from all those centuries ago were great thinkers and planners and always used every opportunity to make public places beautiful as well as highly functional.

But then one must consider the attractions held there. Christians were slaughtered there by the thousands for the sake of sport. Captives from foreign lands were torn apart by exotic animals all to please the crowds there. We noted the view from the corridor where victims would soon taste death before a cheering crowd. Imposing to say the least. We saw the places where gladiators would prepare for battle in a desperate struggle to survive and ultimately pursue the possibility of freedom. The blood ran from this place like a river with alarming frequency. How can people join  in a cheer at the sight of such carnage? We are strange creatures indeed.

I bowed my head and said a prayer, hoping that such stories will one day be told to disbelieving children with no frame of reference for such violence. I have to pray the world will one day be a better place than people all too often make it.
Posted by Connie Baggett at 8:14 AM