The Healing Power of a Spiderman Tattoo 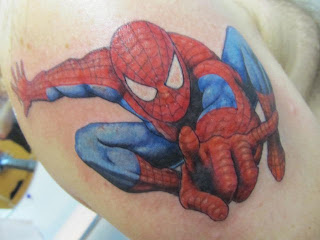 When I was growing up, the only people with tattoos were old Navy men--the common anchor, an occassional hula girl--and always done in a fading shade of blue displayed in a fleshy sea of wrinkled skin. Because I seldom had a chance to really look at one, I was maddeningly curious about them. But never was I tempted to get one myself. My mother didn't like them, and I suppose I took up her distaste as time went by, sometimes silently judging those around me who wore permanent artwork displayed on their bodies. I even read an article once that suggested people with body art were somehow a little bit "off" psychologically. I let that information reinforce my prejudice. But last week, something happened to change all that.

I meet all kinds of people as I work, some community leaders, some defendants in criminal cases and some just plain salt of the earth kind of folks. A little more than a year ago, I met Stephen Pryor who runs the Constituent Services offices for the Baldwin County Legislative Delegation. Now, Stephen is very bright with a rapier wit and wonderful sense of humor, so we get along famously. He is a devout Catholic and has six beautiful children and an amazing wife. He daringly shaved his head months ago, but other than that, he doesn't seem like a mysterious, live-on-the-edge kind of guy. More white bread than any exotic multigrain on the breadscale of life.

Last week, he was returning a call about a legislative matter and I noticed the image of Spiderman on my caller id. Being a curious soul, I asked him about it.

And he told me a story that changed my mind.

"It's for Father Ernie," he said. Father Ernest Hyndman Jr. was the priest who ministered to the faithful at St. Agatha Catholic Church in Bay Minette. The 46-year-old beloved man of God was found dead in the church rectory early on Aug. 2 of a self-inflicted gunshot wound. His death left hundreds of people who knew and loved him stunned and emotionally distraught. He was a man tortured by mental illness, bi-polar disorder. He often masked the emotional ravages of the disease through humor, telling Cajun jokes or extolling the power of the mightly LSU teams. And there was his affection for Spiderman. Stephen said Father Ernie had a Fathead poster of the superhero on the wall in his "man cave" at home. He laughed and talked about getting a tattoo.

Father Ernie was the kind of minister who loved unconditionally. Stephen's youngest son Phillip has Down Syndrome and made a habit of slipping out of the pew at the end of the service at St Agatha's and running to jump in Father Ernie's arms. The priest never missed a beat and the ritual was a regular part of the service as he dismissed the congregation. Stephen said his son loved Father Ernie, just as the priest loved the little boy.

But then, Father Ernie's illness overcame his will to fight it. He visited with friends at dinner, went home, and took his life.

"He was my friend. I was devastated," Stephen told me. "I couldn't eat, and at night I couldn't sleep. I finally had to go to get a sleep aid from my doctor. I was just shattered in my grief for two weeks."

Then, a group of people from St. Agatha's decided to go to Gulf Shores and get temporary tattoos  commemorating LSU and Spiderman in honor of Father Ernie. Stephen went along. As he watched, he said, an idea came to him.

"I asked the woman if they did real tattoos, and she said no but the shop down the street did," Stephen said. "I told my wife I was going down there. She looked a little shocked, but said 'okay.'"

"I walked in and told them I wanted a Spiderman tattoo," Stephen said. "They pointed me to a guy in the shop, and he said I came to the right place as he pointed to a Spiderman figurine on a shelf. I told him about Father Ernie, and we looked at some internet images and there was the same one from the Fathead in Father Ernie's house. So I got it. It hurt like Hell, but I kept thinking this was nothing compared to the pain Father Ernie suffered every day from his mental illness. When the artist was finished, it was the best work he had ever done. He wanted to take a picture to use in his catalog. I told him that was fine, as long as he named it 'Father Ernie's Spiderman.'"

And the process was more than just a symbol of a great friendship, Stephen said.

"I walked out of there a healed man," Stephen said. "They say whenever something bad happens, you should take something good from it. I realized I had not been grateful, or had not been verbally grateful to people who made a difference in my life. I was the leader for Bible School this summer and had been nervous about the kids playing volleyball and the chance that ball would roll into the street and someone could get hurt. I mentioned it to Father Ernie, and the next day, he had put up a little picket fence along the street. I appreciated it, but never said 'Thank you.' He touched so many lives, and he touched mine." 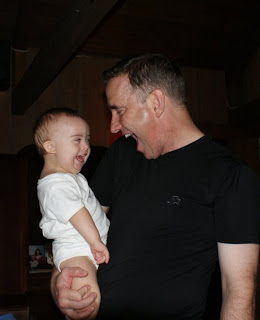 Posted by Connie Baggett at 7:16 AM