I felt the familiar prickle on the back of my neck as the wriggling blades of grass marked a trail through the foliage. Surely it was a lizard, maybe a rat, I told myself as I dismissed the shiver. I was decked out in my yard work best: jeans, a Lucy Buffet t-shirt and a straw hat. Sweat was already dripping into my eyes as the summer temperature soared into the 90s well before noon. 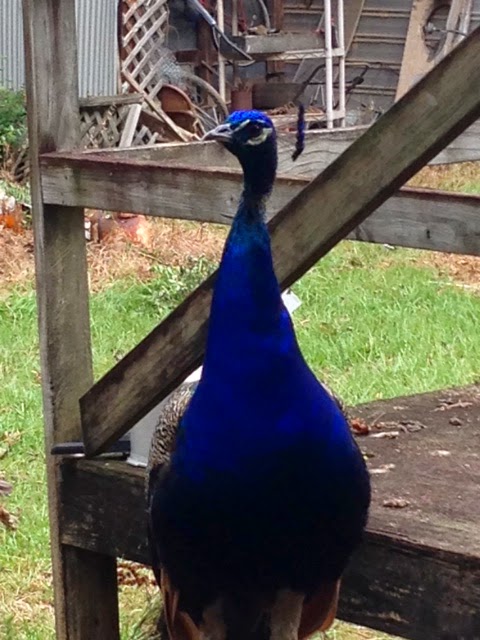 I was on a mission. Three giant fig trees were beginning to drop leaves just days before their glorious fruit would ripen due to a lack of water and oppressive heat. My sister and I dragged up a hose and left the water running the evening before. Now it was time to move it to the next tree. That was the task I was completing as peacocks and a peahen with three babies honked, cheeped and hummed their usual broken nasally tone all around me. A day earlier, there had been four young chicks. For a while now, the babies had been disappearing one by one. Every year since my parents died leaving us a yard filled with chickens, guinea hens and peacocks, we have cared for them, fed them and watched them disappear. It is heartbreaking to invest time and emotion into creatures to see them vanish. 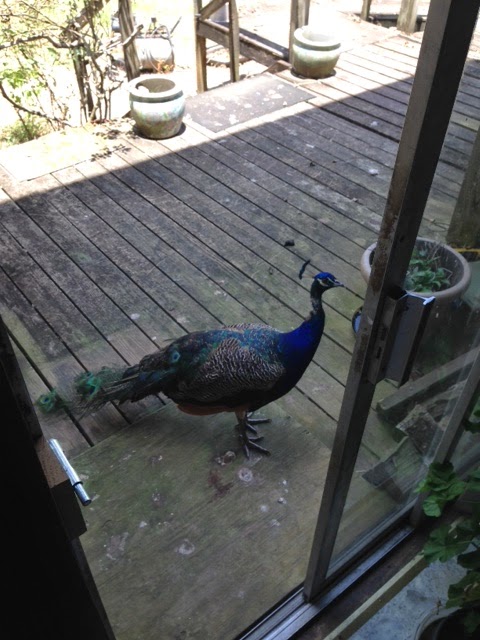 Back when my mother was at her sickest, the fowl about us brought distraction, sometimes easing a restless, sleepless night with a rooster's crowing at midnight just outside the back door. Then there was the night the guineas were attacked on their pecan limb perch by an owl who roosted next to them. The raptor pushed them closer and closer until one flew down to become the owl's dinner. Hawks sometimes come in the daylight, and all morning I heard and saw an eagle flying all around the farm, but never directly overhead. Its screams sent the peacocks running to shelter under the lush green leaves of the fig trees. Reaching deep into the center of the tree with the hose, I drank in the cool air. As a child, I would play on the trunks of the trees and loved the fresh smell of the wide leaves. Those triggers of childhood memories are around every corner here. Gardens, apple trees, peach trees--all planted by a poor family intent on surviving--take me right back to hot days spent outside working with a hoe, five gallon bucket or on a tractor. The crisp smell of dog fennel will always conjure the image of a tractor and bush hog as Daddy cleared the pasture for the next cutting of hay.

All those memories make me smile now, and yet bring tears to my eyes. No matter where I seek those loving hearts on this farm, they are gone. I linger over tools they touched, walk through rooms in which they built a life and raised four girls and then seven granddaughters. I sit on the bed where both took their last breaths a little more than a year apart and I grieve a little more. It is a pattern I repeat hoping the loss will ease with time, but it doesn't. The pain becomes more familiar, but never truly lessens.

I recall working through relentless heat and pushing to complete my task before resting. I am older now, and frequent resting is non-negotiable. I worked this week in short bursts clearing privet hedge from blueberry bushes, stopping to pick a few sweet berries now and then. Soon I headed back to the house to get some water and cool a while. Opening the front door and back door created a great breeze, and I enjoyed the call of cicadas, mockingbirds and the drone of Navy training planes overhead. I picked up a red bandanna my mother wore as a headband. It was still tied as she left it. I put it on my head and walked back to my labor. A jungle can take over a place in a few months if no one works to stop it. It's my way of honoring my mother and grandmother who loved nothing more than cleaning the yards.

I soon headed back to check on the water hose and froze at the sight. There where I had been struggling with the hose lay a six-foot-long serpent. Black at the head and fading to light brown at the tail, the coachwhip was stalking the baby peacocks. I solved a mystery but watched helplessly as he turned and slipped into the grass and disappeared under the old back porch. I looked for the snake afterward with no luck, but I know he waits there. And I remember what my mother said about coachwhips: there are always two. 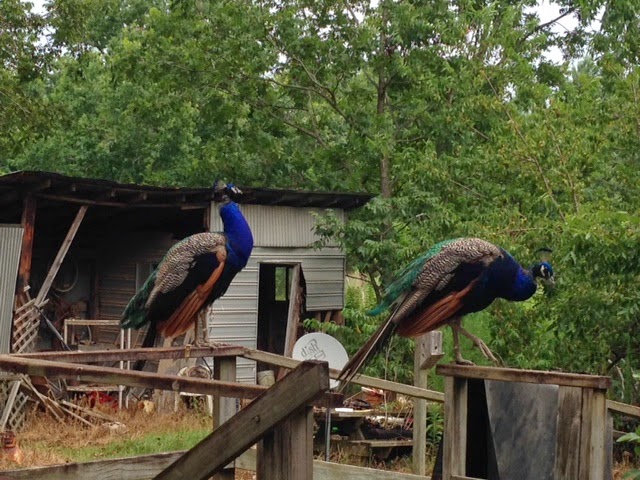 I fed the ornate birds, even tempting one to eat from my hand before I left. The peacocks are
extraordinary  creatures. They appear to be constructed from the leftovers of five or six beautiful birds: brilliant green and blue, speckled brown and white, black and tan. Their feathers shed this time of year after the brilliant mating ritual of spring is done. And so life goes on at the farm. Spring yields to summer, to fall and winter until green leaves sprout again. There is joyful fruit borne of the land as hawks and eagles wait to snatch smaller creatures away. And there are snakes in the grass, as there have always been. Yet we fight on, daring the jungle to take back the land and holding it at bay with our blood, sweat and tears. It is as it was in my childhood, and as time allows, I will see it repeated to my old age.
Posted by Connie Baggett at 7:59 PM